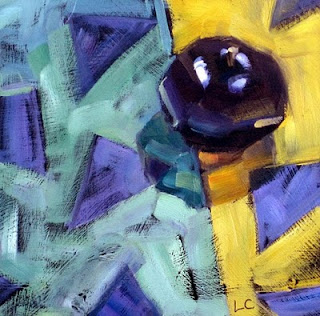 6x6  $90
Here's another painting with my little triangle cutouts. I like the tie- in of the dark plum with the dark under painting. I want to tell all of you about the BEST documentary we saw last night (Netflix DVD) called Waste Land. It's about a Brazilian born artist named Vik Muniz who was commercially successful in NYC and wanted to take on a socially redeeming project in his native country. He chose the largest landfill in the world- in Rio- and his goal was to have his art make a lasting difference in the lives of the people. It is a daunting project, but it's highly successful and the documentary is fascinating. I think non artists will enjoy the film and artists will love it, as I did. If you see it, let me know what you think!