Not Your Granny's Europe 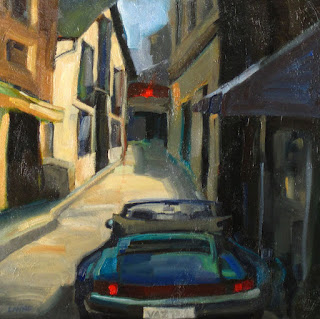 16x16; contact me if interested
This is the reworked lower portion of the painting I cut in two. It's a comment on the contrast you see in the "old country"- very very old buildings juxtaposed with modern technology. The one I don't get is high heeled shoes on cobblestone streets. The women seem to manage just fine, but I can't imagine trying it! The high heeled shoes alone are challenging enough.
We're leaving early tomorrow for points south. We'll get no further than Portland tomorrow as we have people to visit. There's no hurry though; this is a road trip and road trips are meant to be savored. I'm taking paint supplies to Arizona, but no light box, so I doubt there will be many still lifes. Don't know just what I'll paint, but I'll find something!
Posted by Layne Cook at 11:18 PM 7 comments: 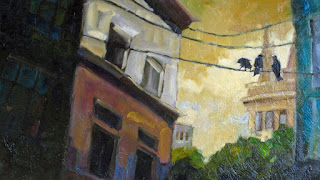 Here's another of the Spain/Portugal series which, by the way for any locals who are reading this, will be on exhibit at the Meyer Wells showroom in the Seattle Design Center by the second week in November-at least January. There is an art event planned there for 11/11/11 that promises to be a lot of fun. Click on this link if you want to know more: www.communityartistsprogram.com

This painting actually part of a larger painting at one time, and I wasn't liking the way the whole thing came together, so I cut the panel and worked it into 2 separate paintings. That's the beauty of panels; you can "crop" as needed.

Sunday we're leaving for Arizona, taking our time and detouring into Colorado and New Mexico- making a road trip out of it. Usually we go more directly. I've been busy preparing to leave, so I haven't had time to paint (I miss it!) but I am taking paint supplies with me. There's a fabulous clay studio near our house down there, though, so I split my time between paint and clay- and hiking and tennis and pickle ball and biking.....what a life! Am I lucky or what?
Posted by Layne Cook at 5:45 AM 6 comments: 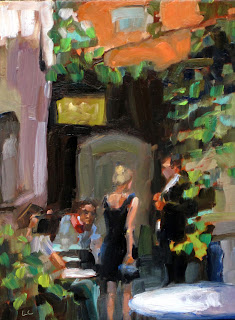 8x6 Bid on this Painting
Painting #2 of the DPW Challenge. It's been a delightful experience seeing all the paintings that evolved form the reference photo. I look forward to more this week.
Posted by Layne Cook at 4:21 PM 2 comments: 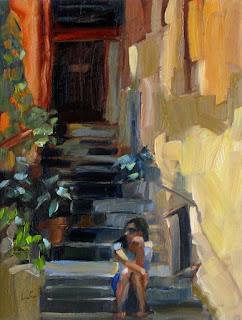 8x6 Bid on this Painting
This is a conceptual composition for a larger painting that I am doing as a commission. As I was looking at the photograph supplied by the customer (a wonderful photo taken in Rome) and pondering the possibilities, it occurred to me that some of my fellow daily painters might enjoy this challenge. I submitted my idea to the Daily Paintworks team, and it was selected for this week's challenge. I find it very fun to see what other artists come up with, given the same material to work from. It's exciting and inspiring!
Posted by Layne Cook at 2:07 PM 4 comments:

House on the Hill 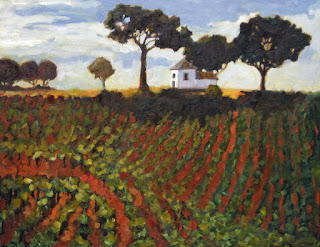 24x30; contact me if interested
I posted a version of this a couple months ago, but it has been through may renditions since then. With these larger paintings I find that I can't get the depth and complexity  that I am looking for without several painting sessions and paint layers. The challenge is to retain spontaneity at the same time.
Posted by Layne Cook at 4:35 PM 3 comments: 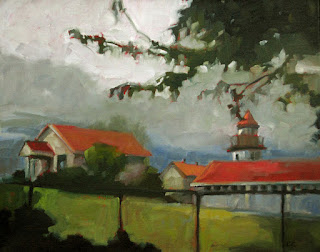 16x20; contact me if interested
Leaving Europe momentarily and returning to Seattle, I painted this view of the Alki Point Lighthouse. Usually it's photographed from the water, but I walked down a side street and got this view. This is a pretty good example of the weather we can expect this fall-maybe minus the blue sky. That's why Jed and I are headed to Arizona in a couple weeks. We have a nice getaway there just south of Tucson where we can hike, play tennis and pickleball, golf and bicycle, as well as take in the charms of Tubac and Tucson. BTW, we do rent the house out in the winter at very reasonable rates. There are still time slots open. Check out www.arizonazen.blogspot.com if you're interested.
Posted by Layne Cook at 1:42 PM 5 comments: 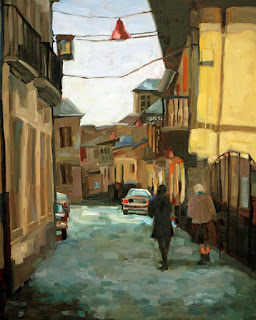 I've wrapped up my Spain and Portugal series with a total of 13 paintings- 2 of which have sold. The rest will be on display at the Seattle Design Center in the Meyer Wells Showroom for an undefined period starting sometime at the end of October. There will be a big event on November 11th, featuring 11 artists in the Community Artists Program- and food and wine. I will have more information on that very soon.
Relevant to the subject of Spain, I heard today from a young Dutch woman we met on the Camino de Santiago. She said that we (my husband Jed and I) are "featured" in a Dutch TV show about the Camino (http://www.rkk.nl/kruispunt/; click on the first of the 3 shows- the one on the left depicting walkers). On our first day in St. Jean Pied de Port there was a Dutch film crew. They filmed us at breakfast (OMG I looked bad!) and then later on the walk. The Dutch man I was talking to at breakfast later died in Pamplona of a heart attack. We heard that a Dutch man had died there, but we didn't know until today that he was the one. Pretty shocking because he was about our age.
Watching the film brought back a lot of good memories. It was a special experience and I would definitely do it again. I highly recommend it to anybody who wants an inexpensive, somewhat challenging, and personally enriching experience.
Posted by Layne Cook at 9:18 PM 6 comments: 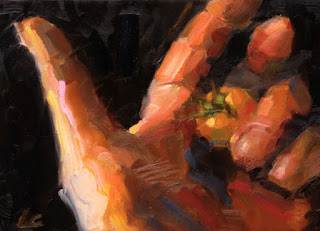 5x7 Bid on this Painting


This week's DPW Challenge is to paint your hand. Not easy doing it from life, so after a couple attempts I took a photo. It was a challenge to think in terms of shapes and only include enough detail to ensure that it reads as a hand.
It just started to rain HARD. Guess fall is really here. This is the first really hard rain we've seen in Seattle this season. More is sure to come.
Posted by Layne Cook at 5:32 PM 3 comments: 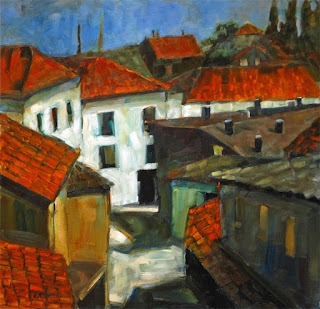 More of the Spain/Portugal series. I have wrapped it up with 11 paintings (I created 13, but 2 have sold) and this week I will be framing them and preparing them for a show at the Seattle Design Center. In the past few days I have been working on color. My husband says my paintings have become dull and unexciting. I had been trying to work with neutrals and spots of color, but when I took stock of what I had done recently I saw that he was right. My neutrals were "blah" . I needed to move toward more neutralized color rather than flat beiges and greys. I went back to what I learned from Robert Moore's workshop and mixed up a big batch of good neutral using complements (cad orange and ultramarine ) and used that to unify the painting by mixing just a bit of that with all my colors. I use just a bit of pure color for "pops" in selected places. I often pooh pooh my husbands critiques at first (he's not an artist) but end up deciding they have merit.
Posted by Layne Cook at 9:40 AM 6 comments: