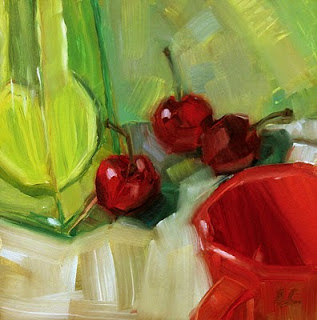 I took this photo yesterday, and then I decided that the paint on the background was pretty thin and dead looking. I think I went more transparent trying to catch the effect of the light cast on the wall by the glass vase. It didn't work. I fixed it today, and i will post a new photo later. I quite like this little painting, although it's probably unclear the the item in the vase is a single slice of lime and it's refracted by the seem in the vase, thus appearing to be heart shaped. That's why I called it "Curiosity".

I set all my paintings on a ledge on the wall, and decide which ones I am going to call "finished" and which ones I want to try to improve. My first "casualty" occurred when I decided that I still didn't like "The Chosen One" and I tried once again to fix the problems. I failed, and I was out of ideas, so I scraped the paint off, and it will be a whole new painting. I'm kind of glad to see it go. I learned what I could from it, and I'll never do a composition like that again.I'm hooked on thrift store shopping for props. It's so entertaining to wander through and try to visualize how I might use certain pieces. Today I picked up a couple tall vases- everything I had was short and/or transparent. I've decided I have to get rid of some things to offset all these things I'm accumulating. Also have to re-configure my studio space for easy access to the props.
Posted by Layne Cook at 10:07 PM