Simply an Orange Bowl (and the value of critique) 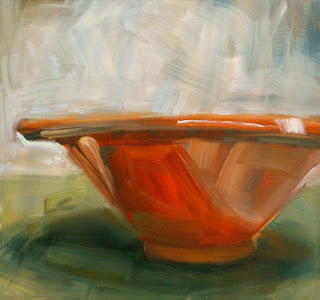 6x6 $90
This is a revision of yesterdays painting- improved (I think) by the suggestions made by one of my fellow painters. She diplomatically sent her critique to my e-mail, rather than posting it in comments, but I wouldn't have minded if she had made it public. I think we can all learn from the observations of others who view or work. Thus I'm sharing it with all of you. In her case, she thought that the shadow was not believable; it was too uniform in value where it should have been darker at the base of the bowl. Also, it seemed to be too high in the back. She was right. I had to stand on my tiptoes to get the shape of the bowl the way I wanted it (showing none of the interior) and I was not so diligent about doing that when I painted the shadow. Thus, it was seen from a different perspective than was the bowl. I was careful this time to observe it more closely, and it was darker at the base of the bowl and well as to the left in a distinct (if subtle) line. I believe it now looks more believable- do you believe?